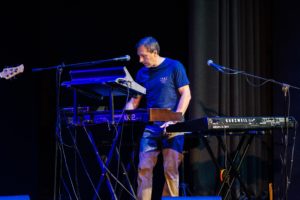 Gennady Ilin (English transcription “Ilyin”) was born on October 18, 1961, in the city of Kursk, Russia. Strong impressions from childhood: how he spent a whole summer outside wearing the same shorts, and eating ice-cream was a special treat. At his audition for the music school, the staff was surprised by the size of his hands – too big for his age and constitution. Gennady became especially interested in music after his family bought him a piano – he could sit and improvise for hours. As a 6th grader, he began to play in a few bands with his friends who were much older than him, sometimes as a keyboard player, other times as a drummer. After finishing school, Gennady studied to be a pianist and a piano teacher at the Kursk Music College for four years. His musical tastes were formed exactly in the 1970s. Although foreign music was not widely available in the USSR, Gennady somehow managed to get hold of it and listen to the Beatles, Deep Purple, ELP, Led Zeppelin, Yes, Queen, Genesis, etc. Yet his education, of course, instilled in him a love and understanding of classical music. Gennady has always loved sports: in his younger years he won local swimming and running 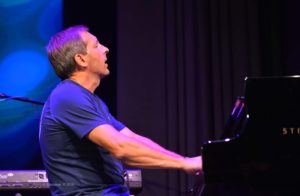 competitions, and he still goes jogging every morning. After graduating from the Music College he served two years in the military and even there found time to play the piano. Although Gennady had already been working on composing music, he realized he had to learn to do it professionally. When he came back from the army, he and his first wife moved to St. Petersburg. A few years later Gennady Ilin was admitted to the Rimsky-Korsakov Conservatory and studied composition with Igor E. Rogalev. He spent almost every vacation in Kursk playing with different musicians, including Yury Skripkin (drums) and Oleg Babynin (bass). A band with the name “Little Tragedies” had its first official show on August 6, 1994, in Kursk. After graduating from the Conservatory at the end of 1994, Gennady Ilin moved to Germany to join his wife and two daughters. It was a hard, but necessary decision. Since then “Little Tragedies” has functioned over a distance, but quite fruitfully nevertheless. A more detailed description of their discography can be found in the About menu. Gennady travels to Russia once a year for rehearsals and recording sessions. All the composition work is done in Freiburg, and the band receives the scores and a digital sample recorded with a synthesizer. Since 2006, Gennady has owned an analogue MiniMoog Voyager (50th Anniversary Edition) which can now be heard in every Little Tragedies’ recording. Gennady got married a second time and currently works as a piano teacher with children and adults. He still considers Keith Emerson the best keyboard player, arranger and interpreter of classical music. His favorite albums are: “Brain Salad Surgery” ELP, “Night in the Opera” Queen, “The White Album” Beatles, “Time of Legends” Cairo, “Six Degrees of Turbulence” Dream Theater, “Memento z Banalnym Tryptykiem” SBB, “Idea Fix” Czesław Niemen, etc. Favorite movies – “An Ordinary Miracle“, “Sherlock Holmes and Dr. Watson“; favorite cartoons – “Shrek” and other DreamWorks productions. 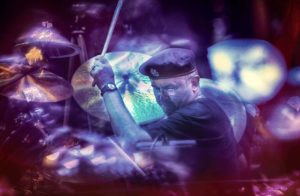 Was born on October 9, 1964, in Kursk, Russia. As a child, he enjoyed going to the circus and watching the drummer play in the orchestra. He finished school in 1980. During the school years he first started playing in a band… but on a bass guitar. He became a drummer only a year later and with another band. Like many musicians, Yury went through a phase playing in restaurants and at weddings, and only after having served in the military did he focus on music seriously. He studied at the Music College in Kursk for two and a half years, played in a band with other young musicians and then met Gennady Ilyin. In 1988, they started playing together: learned a few songs in a five-day period and recorded their first joint project called “Democracy in the Lunatic Asylum” followed by several other albums. Soon afterwards, Yury left for Moscow where he had his first experience with real studio work and tours with Viktor Zinchuk. Six years later, he came back to Kursk to start a new life. He recorded an instrumental album “Little Tragedies I” together with Gennady Ilyin and has been an integral part of the “Little Tragedies” band ever since. Yury listens to various classical, contemporary and jazz music, but his favorites are: the Beatles, Deep Purple, Queen, Pink Floyd, UK, ELP, Rush; in the Russian contemporary music – Vladimir Vysotsky. Now Yury works as a drummer and assistant conductor of the military brass band in Kursk. He is proud of his three children and a newborn granddaughter, a cozy house and his custom-made maple drum set “Ludwig”. 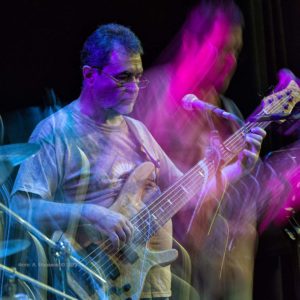 Born on April 17, 1969 in a small town near Kursk. His family was fond of music – his grandmother, father and uncle played the guitar – and Oleg is grateful to them for teaching him the basics. Once on TV he heard the music of J.S.Bach and immediately decided to seriously pursue his musical education. His parents bought him a piano and Oleg started taking piano lessons at a music school and then playing the keyboard in the school band. This was the wonderful time when his love for rock-music began to grow. In the beginning, these were, of course, the Beattles, then Pink Floyd, later also Deep Purple, Rainbow and Scorpions, then Led Zeppelin and Queen. In 1986, Oleg finished both secondary school and the music school and entered the Kursk Music College to major in contrabass. A year later, he had to join the military. Having served for a year, Oleg was assigned to the regimental band, which also had a rock band where Oleg played the bass guitar. It was a very useful experience because they played different kinds of music, from jazz to rock and pop, depending on the individual line-up. After the army, Oleg came to Kursk where he met Yury Skripkin and, later, Gennady Ilyin. They seemed to have common interests in music, so after a while, an album called “The Paris Symphony” was recorded in a Moscow studio. At present, besides Little Tragedies, Oleg sings in a church choir. His favourite classical composers are J.S. Bach, especially his vocal pieces, Mozart, Beethoven, Tchaikovsky, Mussorgsky, Rachmaninoff, and Stravinsky. In rock music: the Beatles, Pink Floyd, Queen, Yes, UK, ELP, and Dream Theater. 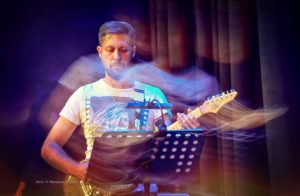 Born on March 6, 1975, in Kursk. His first musical memories – the beautiful singing of his mother and grandmother, and also the music in Russian cartoons, movies and stories on vinyl disks. But his real interest in music was awakened by his older brother Vladimir: he had a big magnetic tape, and then a reel-to-reel tape, recorder and a large collection of music: Queen, Deep Purple, Rainbow, Ozzi, Led Zeppelin, Scorpions, etc. His first guitar lessons were also taught by his brother. In 1991-1995, Alexander studied at the Music College in Kursk. At this time, he played in a band called “Post Office”, with whom he recorded two studio albums and played at several local jazz festivals. In 1999-2001, Alexander was part of a Moscow jazz-rock band “Modus” and played at international jazz festivals in the Baltic States and at Moscow clubs – he considers that time a good performing experience. The changes in his life and return to rock music occurred after meeting Yury Skripkin and Oleg Babynin. Later on, Gennady Ilyin heard him play the guitar in early Little Tragedies’ music and approved of Yury’s suggestion to invite Alexander to join the band. His major musical influences: Queen, Camel, Genesis, U.K., E.L.P., Yes, Cairo, etc.; guitar players: Brian May, Andy Latimer, Steve Hackett, Steve Howe, Trevor Rabin, Allan Holdsworth and many others; all Russian classical composers and, particularly, Pyotr Tchaikovsky. 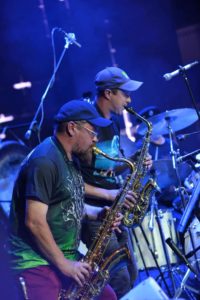 Born on July 31, 1979, in the city of Ryazan. His first encounter with music took place at home. His father was a good singer and he could play the guitar. During his childhood, Aleksey learned to play button accordion and his sister played the piano at a music school. Every family celebration included music performances. They had recordings of a number of different artists at home, from Vladimir Vysotsky to ABBA and Deep Purple. Finally, Aleksey decided to pursue professional education as a drummer. This never happened, because his family had to move to a town near Kursk in 1996. There Aleksey met the local musicians and played the bass drum in a brass band. But then, influenced by his friend Alisher Rakhmatov, graduate of the Tashkent Conservatory, Aleksey got interested in the saxophone and started teaching himself. At that period, he enjoyed listening to AC/DC, Iron Maiden and played the drums in the local band called “Happy Roger”. In 1997, Aleksey came to Kursk to study the wind and percussion instruments and major in saxophone. Later, through his musician friends, he met Alexander Malakhovsky and played off and on with the “Post Office”. It was then that he first heard ELP, YES, Genesis, UK, Сairo, Dream Theater and it changed his view of music. The preparation for a joint concert of “Post Office” and “Paradox” brought him closer to Oleg Babynin and Yury Skripkin. In summer 2000, Aleksey met Gennady Ilyin and after rehearsals was invited to join Little Tragedies. At present, besides the band, he works in the Kursk military brass band together with Yury. His favourite bands are: Queen, YES, Cairo, Camel, ELP, etc. Composers: Tchaikovsky, Rachmaninoff, Mussorgsky and Beethoven.